Round 2 of the Quarter-Finals is complete; see the bracket below for the current standings.

Here is the current bracket: 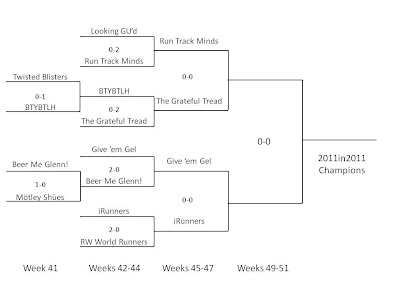 Also, the five teams whose All-Stars won the matchup earlier this year will each be able to use an additional 5% scoring bonus in any of their matchups (Teams: iRunners, BTYBLTH (already used their's), Run Track Minds, Give Em Gel, and Beer Me Glenn!).

Important Club & Personal Announcement
I will be stepping down from the role of Club Admin at the end of this year.

This may be no surprise to some of you - given my lackluster ability to post results - and in that regard I feel badly that I've not preserved the high enthusiasm as in past years. This Club deserves to have a person at the helm who can help motivate fellow runners to reach and exceed their goals.

I'm very proud of how the Club has evolved since Karina (keenagirl) and I picked it up in mid-2008. A lot of credit must go to the Team Captains for keeping this organized and fun. I have always emphasized that this is an individual achievement club, but the teams do help a lot.

I will run the Club for the remainder of the year, but hope that someone will step forward and take on this role for 2012 and have spoken with a few members who have expressed an interest in taking over next year. I will be glad to assist the next admin with 2012 signups and such. There are several RWOL folks who have demonstrated some excellent database/web development skills that exceed my own and could really make some improvements to the function of the Club.

I still hope to participate as a member myself once I get my running mojo back (i.e., organize my time better), so I'm not saying goodbye. Just, "Thank You" for letting me be a part of this cool Club.


Signups for 2012in2012
P.S. It's almost time for signups for the 2012 Edition. We usually have them from end of October and run through early December. Keep your eyes open for a registration thread.
Posted by ZubenElGenubi at 3:39 PM